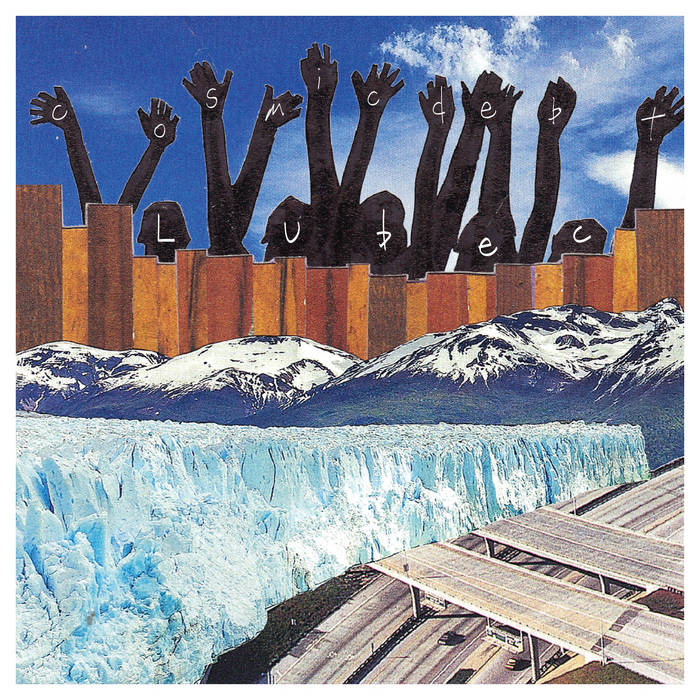 "The first time I saw Portland band Lubec play live, in a ground floor rec room in a weirdly suburban punk house on a muddy hill in Seattle, I was surprised to see only three members in the band — Caroline Jackson on keyboards and vocals, Eddie Charlton on guitar and vocals, and Matt Dressen on drums. It hadn’t even occurred to me to wonder or even care about how they make their enveloping sound; I just knew that, when I put on their latest album, Cosmic Debt, a gorgeous maelstrom comes from my speakers, evoking a sweeping grandeur and an intense intimacy at the same time.

Listening more closely reveals what makes their sound so special. Throughout Cosmic Debt, the instruments are more or less equal in the left and right channels — it’s not a mono mix like My Bloody Valentine’s Loveless, but the low degree of channel separation means that Jackson’s piano, treated with distortion and echo, and Charlton’s ringing guitar blend together so that it’s not always immediately apparent which tones are coming from which instrument. Dressen’s playing, while stick-shattering in a live setting, mixes with all of the instruments and contributes equally to the songs’ percussive drive and sometimes lurching and stuttering rhythms. Engineer and producer Dylan Wall has, with the band, created a sound which is somehow simultaneously loud and hushed. The album’s dreamy, insomniac feel is enhanced by interstitial tracks that feature loops, drones, and ambient sounds.

Charlton and Jackson’s echo-drenched vocals combine and separate into harmonies, melody and countermelody, and call-and-response. There’s urgency not just in the shouted declarations and imperatives (exclamation points appear frequently in the lyrics) but in the quieter moments as well. Lyrically, Cosmic Debt deals in metaphors, phrased obliquely enough to be interesting, but it’s not hard to figure out what’s going on in songs like “Clipped Wings” and “Queen of Cups.” Loss and regret are recurrent themes. “Cracks in the Veneer” expresses the anxiety of facing a loved one’s mortality as “Grey strands appear… I’m facing the subtlety of your doom.” A television metaphor portrays the ambivalence of an aborted friendship in “Failed Pilot,” where there’s “No plot device to end / Why did I think the crowd would see a hit?” “Breakup Haircut” — well, that one’s pretty self-explanatory. The soaring final song’s titular “Ember” is “Both spark and cinder!” to immolate the past and illuminate the present, while the song’s — and album’s — great beauty is the phoenix that rises from the ashes."

Engineered and produced by Dylan Wall at The Map Room in Portland, OR and Tastefully Loud in Seattle, WA. Mastered by Chris Hanzsek.

Bandcamp Daily  your guide to the world of Bandcamp

outré black metal, with a Victory Over the Sun interview and music from Liturgy and Jute Gyte.